These 5 Awesome Healthy Dinners For People Who Hate to Cook are perfect for busy people on the go who don’t have time to cook. Just swing by the convenient Snap Kitchen on the way home and you can prepare dinner in less than 2 minutes! 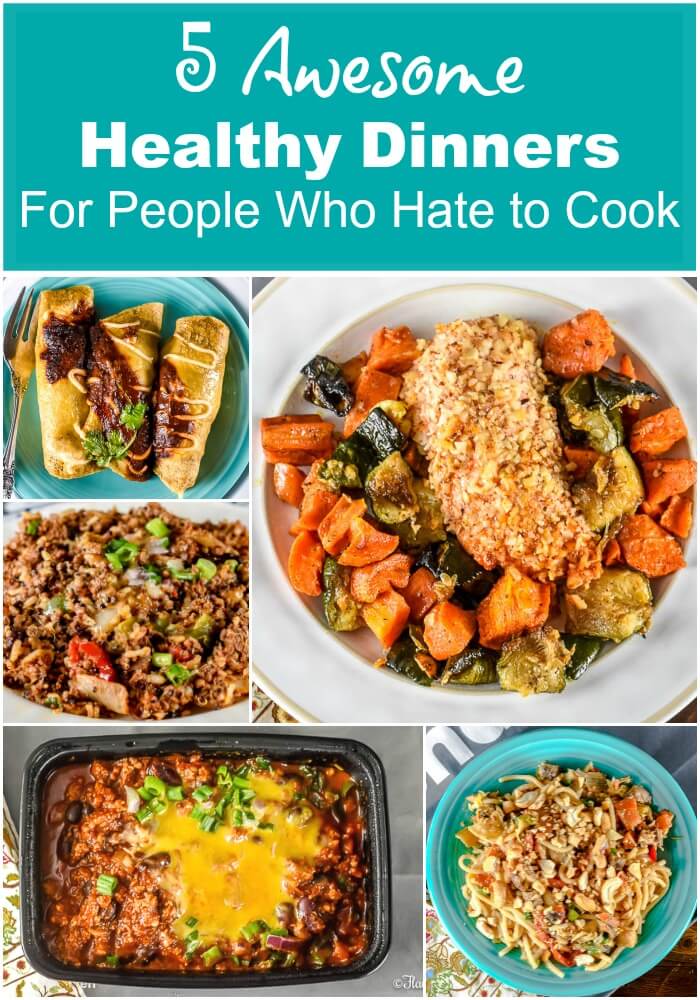 I was so excited to partner with Snap Kitchen because I had already heard about them through word of mouth through our local food blogger group and wanted to try them. I knew it had to be delicious because this group of food bloggers has discriminating tastes and would not be satisfied with any ordinary meal.

In Houston, Texas, Snap Kitchen has 12 convenient locations all over town and out in suburbs as well. I swung by the location near Memorial City Mall.

I was able to park right in front of the store and walk in to see a large selection of refrigerated (not frozen) pre-packaged healthy meals clearly labeled and organized based on the type of protein, (meat, poultry, seafood, vegetarian.) In addition to the meals, they have beverages, breakfast items, salads, snacks, and desserts.

The nice employee helped me find several selections and told me which ones were best sellers, such as the Bison Quinoa Hash, and the Crispy Scottish Salmon.

I knew I was in the right place to find 5 Awesome Healthy Dinners for People Who Hate to Cook. 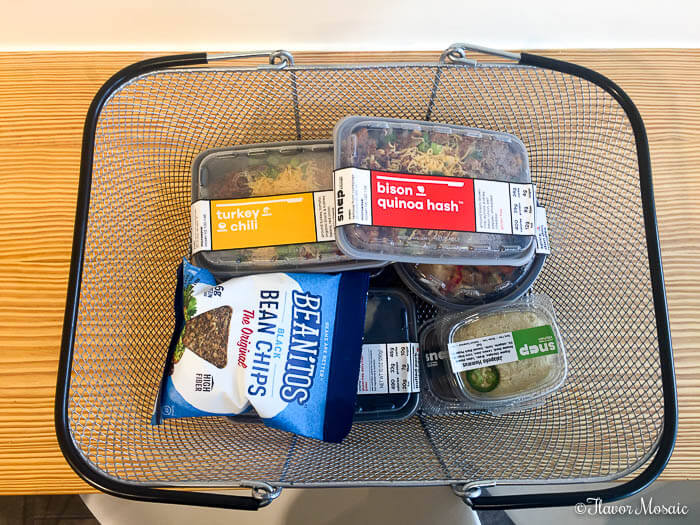 I wanted to try dinners that all had different proteins. So I ended up buying:

In addition, I saw that they had jalapeno hummus, so I picked up a small package of the hummus along with some Black Bean Chips. 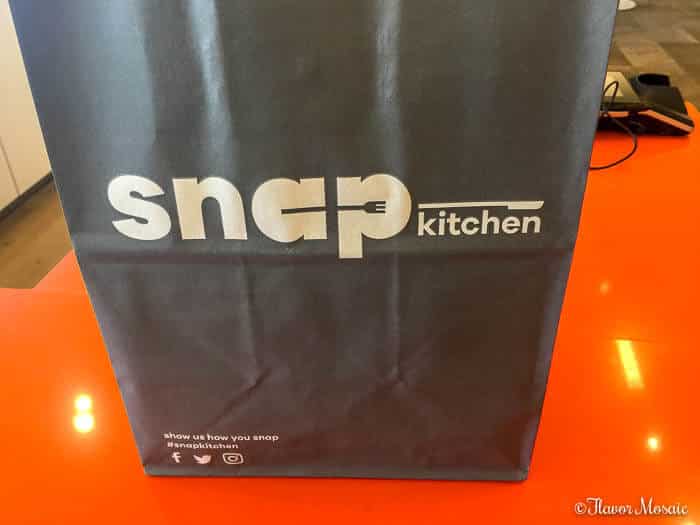 When I got home, the home healthcare worker who helps my elderly Mother-in-Law was there. She had never heard of Snap Kitchen, so I showed her what I bought and explained that the concept was based on convenient, healthy meals to go, and she got so excited!

She checked each meal I bought and checked the labels and said this would really help a lot of her elderly clients. The labels are large and easy to read, so anyone who may have difficulty reading small print should not have difficulty reading these labels. They are nutritionally balanced and have foods to fit all diets, including low-carb, gluten-free, Paleo, or vegetarian or Vegan. 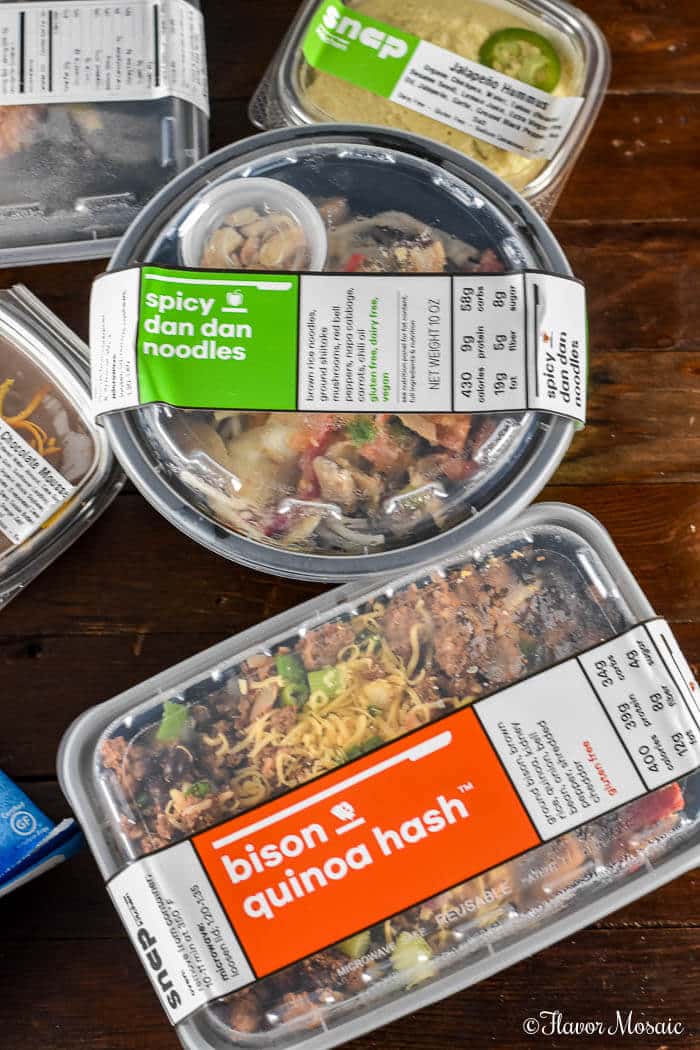 She asked me if Snap Kitchen delivered, and I said that in Chicago they have a mobile app and a delivery service, and I hope that is successful so they expand it to other cities, especially Houston!

These could not be any easier to prepare. They are way easier than even frozen dinners from the grocery store because the Snap Kitchen dinners are refrigerated not frozen so they heat up in about 90 seconds instead of 5 minutes! 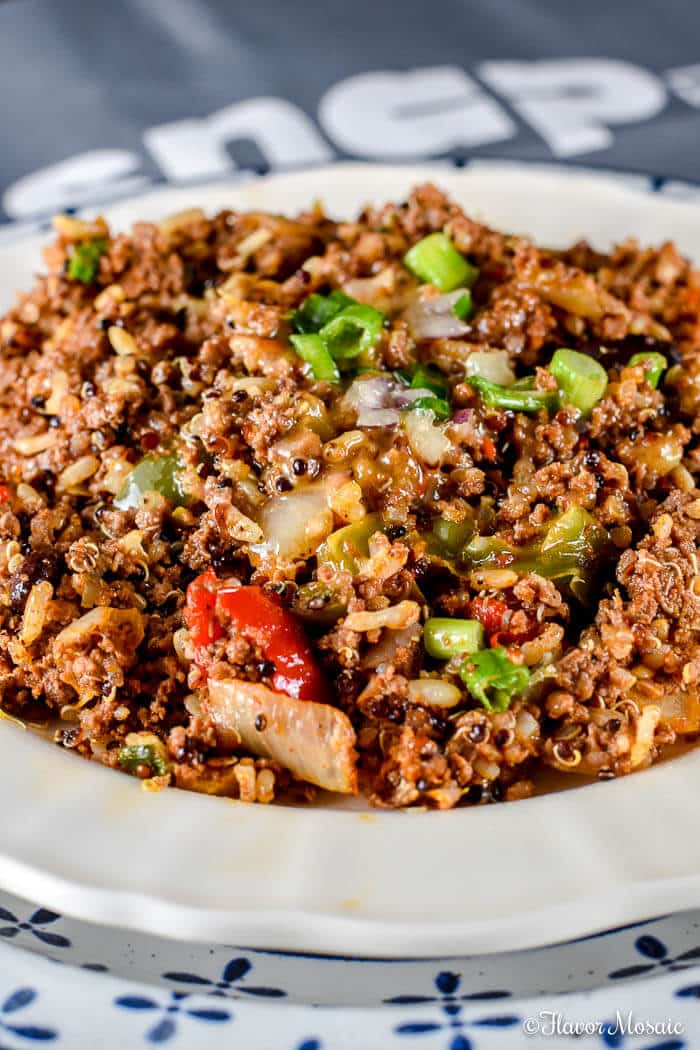 However, of course, the true test is in the taste. My husband had the Bison Quinoa Hash. He was skeptical at first when he saw the name and I had to explain how to pronounce Quinoa. However, he was willing to try it, and then ate the whole thing! He loved it!

I asked him if he would like me to get it again, and he said yes. It was delicious and it filled him up. It was a winner! Whoohoo! 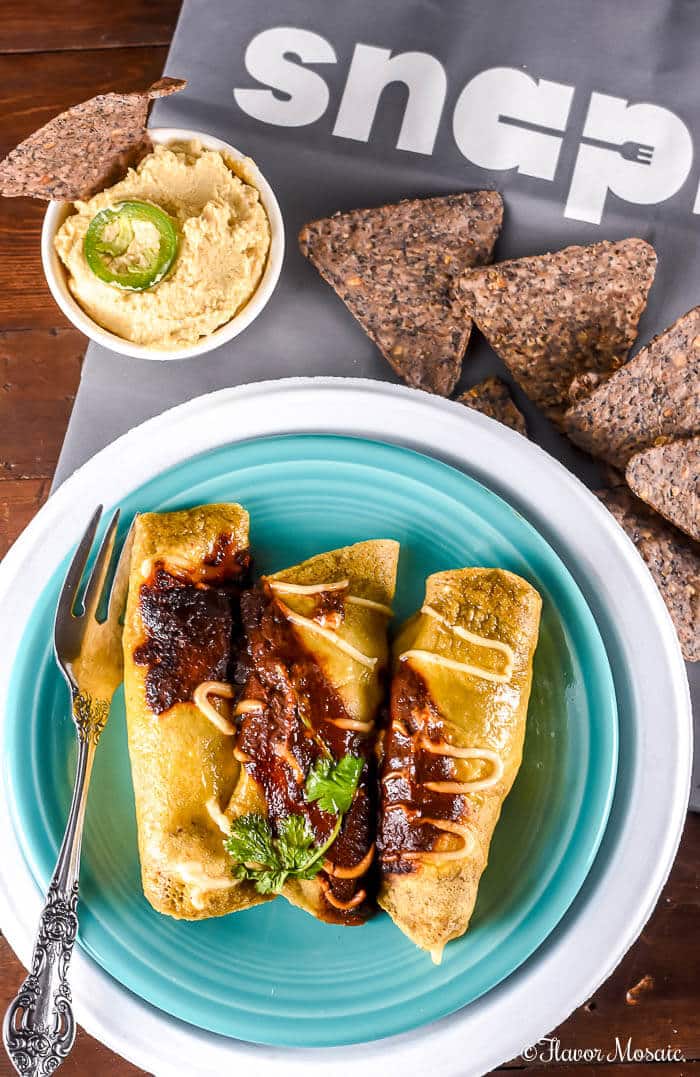 For dinner, I had the Pulled Pork Enchiladas and they had excellent flavor and were filling! I would definitely buy these again. 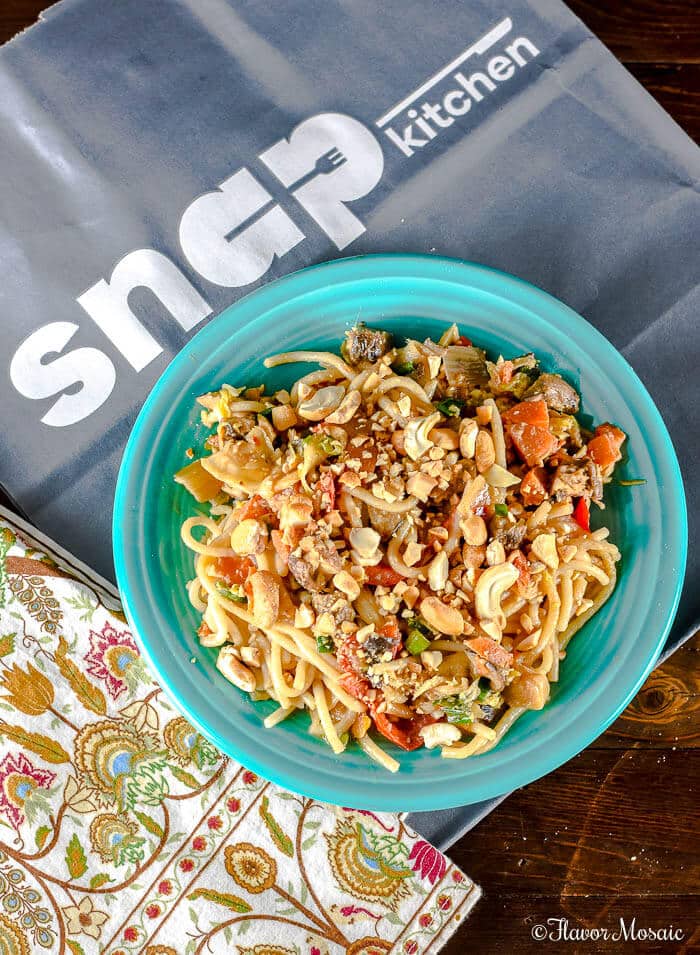 Earlier in the day for lunch, I tried the vegetarian Spicy Dan Dan noodles. I love spicy foods and loved this dish. It was flavorful and had the peanuts for an extra crunch.

It is hard to pick a favorite because they are all so good, but I think this one may be my favorite. Although there are many more dishes that I want to try also. It will be fun trying all the different Snap Kitchen dinners. 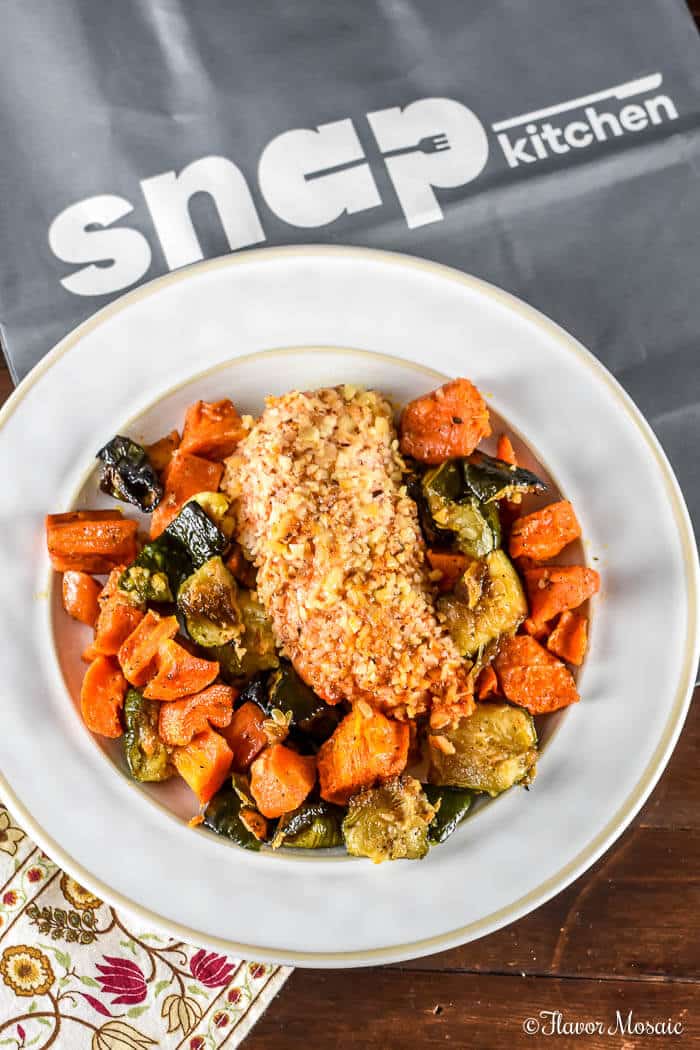 My Mother-in-Law had the Crispy Scottish Salmon for lunch and had finished it all before I had a chance to ask her how she liked it.

Usually, she will be hungry again a short time later asking what’s for dinner. However, this Crispy Scottish Salmon satisfied her and she was not asking me an hour later what time dinner would be. 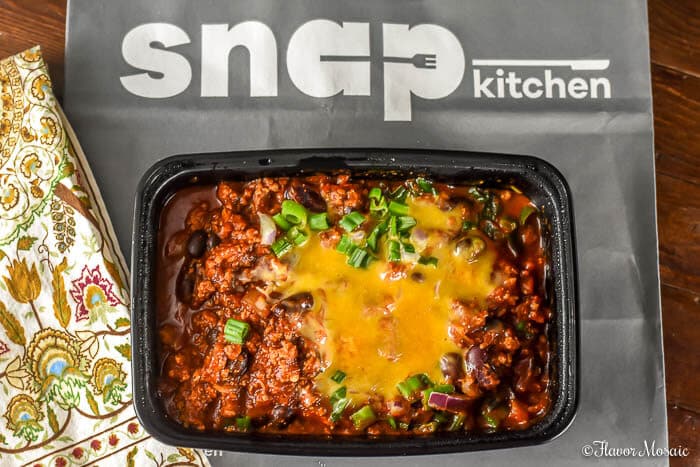 My Mother-in-Law had the Turkey Chili for dinner last night. She loves spicy foods. However, they can’t be too spicy or they don’t like her. I was a little hesitant to have her try the chili, but she wanted to try it.

Of course, she loved it and scarfed it down in no time, and it loved her too because there were no problems.

Those are my 5 Awesome Healthy Dinners For People Who Hate to Cook! I hope you like them as much as we did.

Which Snap Kitchen dinners will make your list of 5 Awesome Healthy Dinners For People Who Hate to Cook?

Be sure to check out Snap Kitchen on their website, and find a location near you! It is perfect for those nights you don’t want to cook but still want a healthy dinner without eating out.