Fudgy, dense brownies are a favorite dessert, just like cream pie…which is exactly why it was a no-brainer to combine the two and make these Peanut Butter Pie Brownies!

You get the rich, moist, and oh-so chocolatey brownie base, successfully followed by a smooth, light, and fluffy peanut butter cream cheese topping.

The creamy topping provides a delicate element to the dense and rich brownie base, cutting that deep sweet chocolate flavor with a more salty-sweet and slightly tangy flavor profile. It’s like eating a Reese’s Pieces in brownie pie form!

Serve your peanut butter pie brownies chilled or bring them to room temperature before adding a scoop of vanilla ice cream or dollop of whipped cream to the dessert bowl.

Why You’ll Love This Recipe

Why This Recipe Works

The affiliate links below will allow you to see the product on Amazon.com. If you purchase one of the items, I will receive a very small commission on the product, which does not increase the price.

How To Make Brownie Layer

How To Make Peanut Butter Layer

How To Cut And Decorate The Peanut Butter Brownies

Serve as is or with your favorite toppings such as whipped cream, chopped peanuts, chocolate chips, or Reese’s pieces!

While I love dark chocolate combined with peanut butter, one obvious recipe variation that comes to mind for this recipe is to make peanut butter pie blondies instead of brownies!

You can easily make this adjustment by simply omitting the unsweetened cocoa powder and then making the following substitutions:

For the Brownie Base:

Other tasty variations you could make include:

What To Serve With Peanut Butter Pie Brownies

These peanut butter pie brownies are rich and decadent enough to be enjoyed as is, however, you could consider serving them with freshly whipped cream or ice cream and a chocolate sauce!

You can also get rather creative with the various garnish options when it comes to serving these brownies. Chopped peanuts, drizzled chocolate bark, or chopped Reese’s Pieces can be added!

WHAT ARE PEANUT BUTTER PIE BROWNIES?

HOW SHOULD I STORE PEANUT BUTTER PIE BROWNIES?

Due to the cream cheese topping, I suggest storing these peanut butter pie brownies in an airtight container in the refrigerator for 4-5 days.

Thaw your frozen brownies in the refrigerator prior to serving.

CAN I USE A NATURAL PEANUT BUTTER FOR THESE BROWNIES?

Since natural nut butters lack any stabilizer ingredients, the natural oils in the natural peanut butter separate from the butter itself. This could have an impact on the peanut butter cream cheese topping, especially after it has rested for some time. 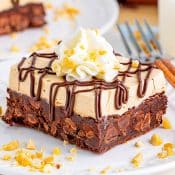 These brownies need to be refrigerated. However, the brownie will be too hard if they are super cold. I suggest letting the brownies sit out for 5-10 minutes before serving so they are not super cold. The addition of chocolate chips in the batter is completely optional, I personally like the texture they bring to the brownies. Dense, fudgy brownies topped with light and fluffy peanut butter pie filling. The addition of the chocolate on top is a little crisp welcomed garnish but again this can be optional. You can even put peanut butter chips or Reese’s Pieces in the brownie batter to add more peanut butter flavor throughout!