Sometimes you just got to have brownies. These oohey, gooey, chocolatey, moist brownies, adapted from AllRecipes Best Brownies,  are neither “cake” brownies nor “fudge” brownies; they fall somewhere in between.

These brownies are the first in a search for chocolate desserts that hubby says I made a few years ago, but he can’t remember what it was, and I don’t know which chocolate dessert it was.  But whatever it was, that is what he wants as a dessert for Thanksgiving. Thanks Honey!   Can you give me a little more information?  He really likes these brownies, but that was not the chocolate dessert.  So my search continues.

To me, these brownies are the best.  They are so delicious and easy to make, I’ll never make brownies out of a box again.  These are so good they don’t even need frosting. However, if you want frosting, check out the original recipe on AllRecipes for the frosting recipe. Enjoy! 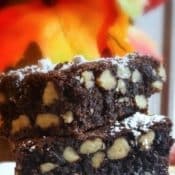