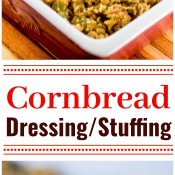 This Easy Cornbread Dressing recipe, or stuffing if you prefer, is a must for a family’s Thanksgiving dinner table. At our house, it would not be Thanksgiving without it. Hopefully, it will become your favorite too.

Our family recipe is an easy shortcut version of a traditional Southern cornbread dressing recipe. Instead of making my homemade cornbread recipe from scratch, we use the store-bought Pepperidge Farm Cornbread Stuffing, which contains the dried cornbread cubes or cornbread crumbles as some call them. 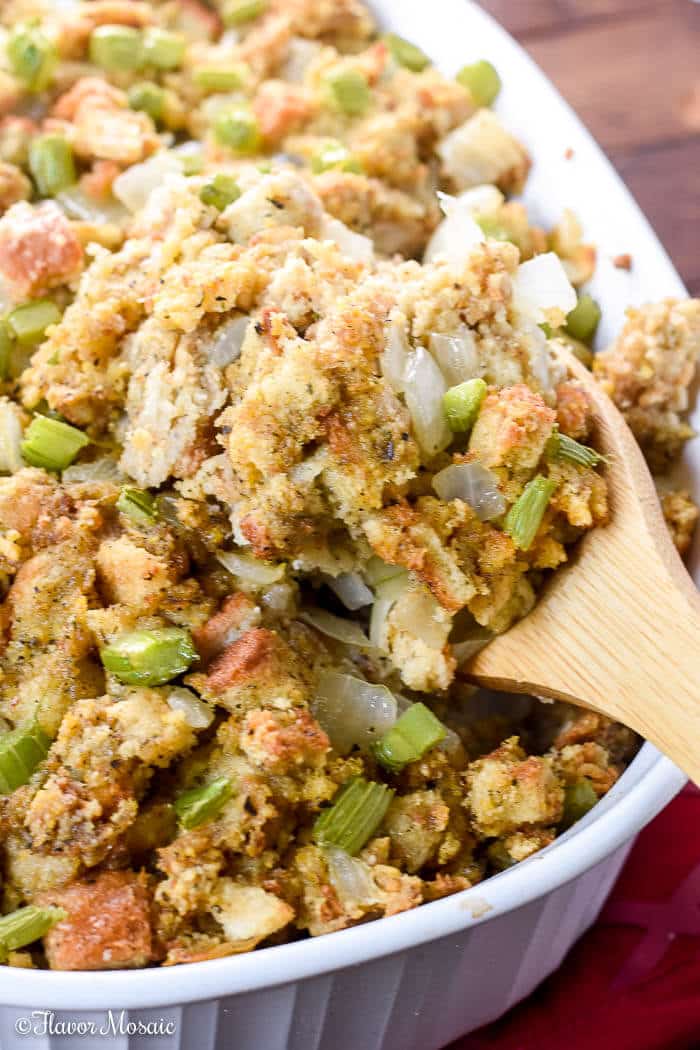 Thanksgiving would not be Thanksgiving if there were no cornbread dressing on our holiday table alongside the turkey, green bean casserole, sweet potato casserole, mashed potatoes, cranberry fluff, or cranberry sauce, or if you prefer Instant Pot Cranberry Sauce.

When I was a kid the food I looked forward to the most at Thanksgiving was the cornbread dressing. The only time we had it was at Thanksgiving. So it became extra special.

It was one of the few times of year that the entire family was together around one table. My Dad had time off work and did the cooking, which was another reason to look forward to Thanksgiving time because he was an outstanding cook. This is my favorite recipe because it was my Dad’s recipe that he served for our family Thanksgiving dinners. 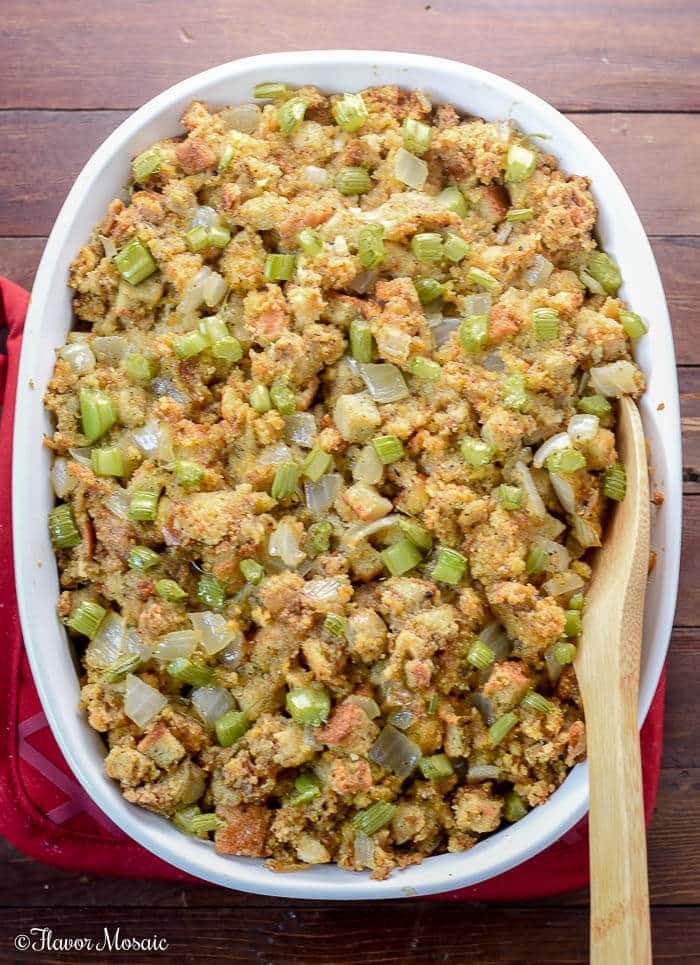 Why You’ll Love This Recipe

It has a wonderful cornbread flavor with celery, onions, parsley, poultry seasoning, and sage!

It is a quick and easy shortcut recipe for cornbread stuffing for when you don’t have the time to make cornbread from scratch and let it dry for a couple of days.

It is not a new recipe. This is a tried and true family recipe that has been made and served at Thanksgiving dinners for decades.

The Pepperidge Farm Cornbread Stuffing gives it just the right texture. It has golden-brown toasted cornbread cubes or crumbles and is not too soggy and not too firm. So you will be proud to have it on your Thanksgiving table.

There is no cream of chicken soup or cream of anything soup in this recipe.

This recipe is a shortcut recipe for those who may not have time to make the cornbread a day or two ahead of time, and let it dry out.

However, if you want to make the cornbread dressing/stuffing from scratch, just substitute my Easy Homemade Buttermilk Cornbread recipe for the prepackaged cornbread stuffing mix and let the cornbread dry out for at least 24 hours. Some people like to combine white bread crumbs with the crumbled cornbread 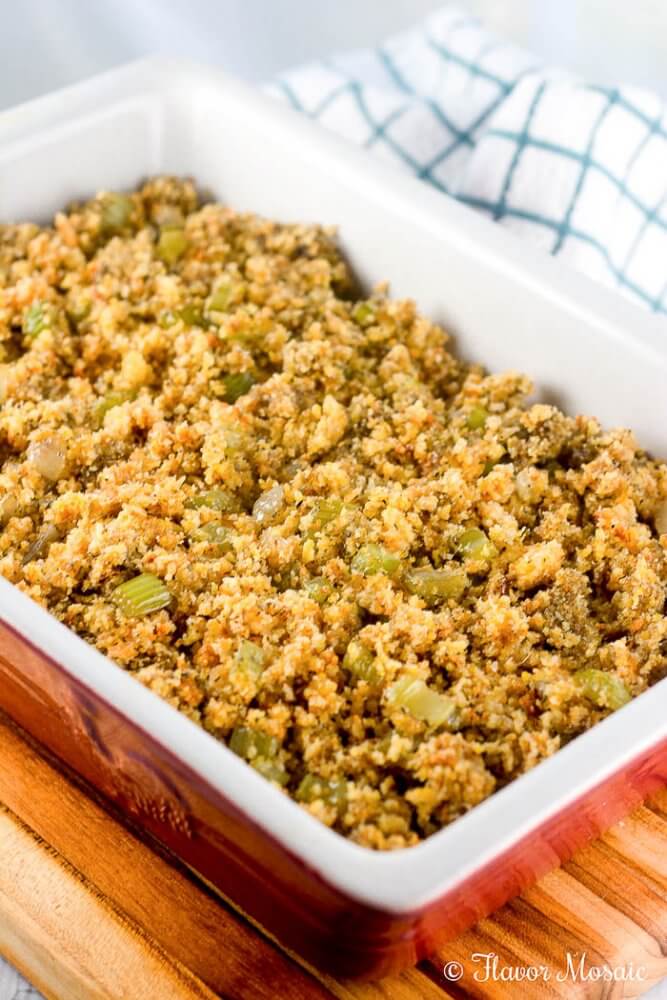 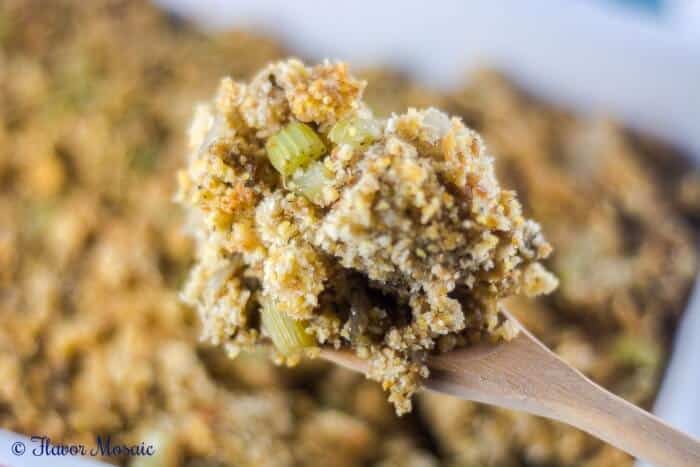 Start out by sautéing fresh celery and onions in butter. If you want you can add minced garlic as well.

Empty the bag of cornbread stuffing mix into a large bowl and add the sautéed vegetables on top. Then pour the chicken broth over the top. Then add the sage, black pepper, and poultry seasoning.

Spoon the cornbread dressing into a casserole dish and bake for about 30 minutes.

I like to add additional seasoning to the cornbread stuffing mix, including poultry seasoning and sage, which is delicious but strong.

If you are not used to the taste of sage, for the first time you make the recipe, you may want to add half the amount of sage to start out with and see how you like it. You can always add more.

I would also recommend using the amount of chicken broth as a guide. Add it slowly to get the stuffing just moist enough. The chopped celery and onions give the stuffing great flavor and texture. 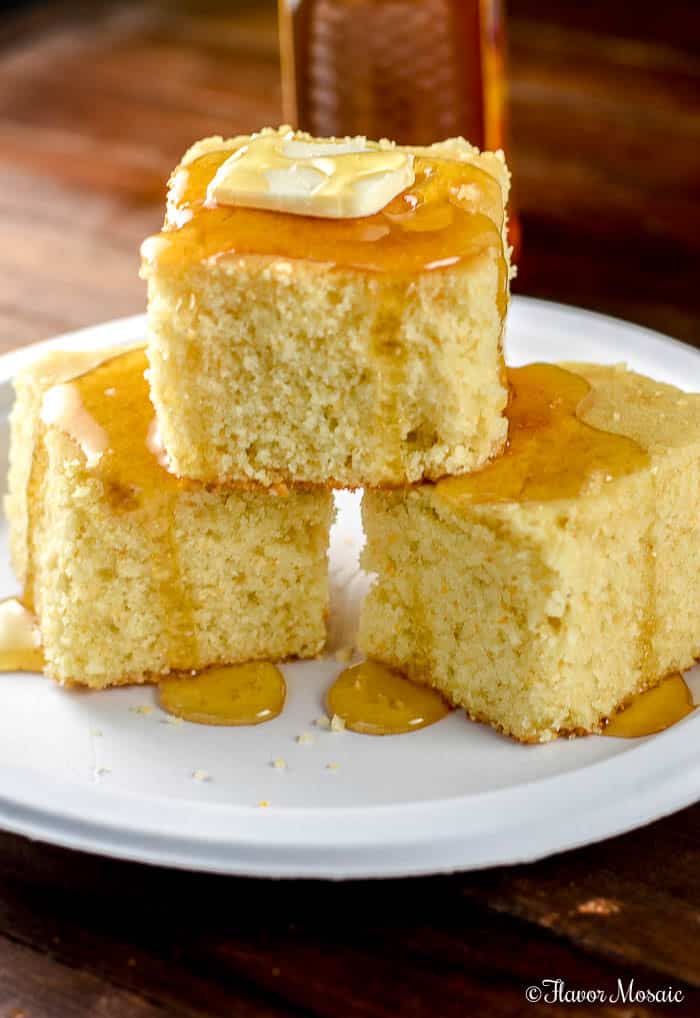 That is all there is to making this Easy Cornbread Dressing. Give it a try before Thanksgiving so you can tweak the amounts of seasoning to your taste.

Serve it with the traditional Thanksgiving side dishes, such as green bean casserole, and sweet potato casserole. Enjoy! 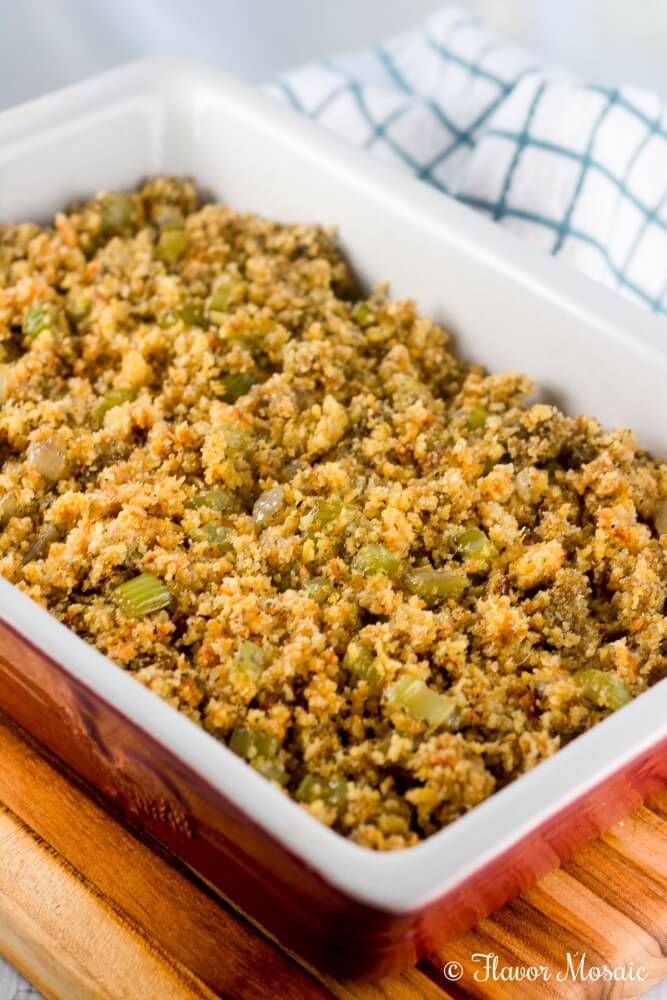 What other recipes will you be serving with this Easy Cornbread Dressing?

Now that you have learned to make this cornbread dressing, will you be making it for your Thanksgiving feast? What other recipes will you be serving with this Easy Cornbread Dressing? 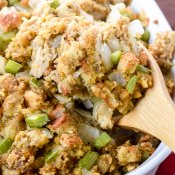 Round out your holiday dinner with these recipes.

Here is a recipe for an easy and excellent Sweet Potato Casserole. 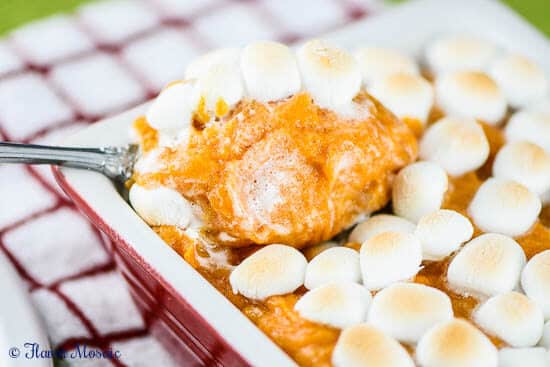 How about adding this Homemade Green Bean Casserole to your Thanksgiving table. 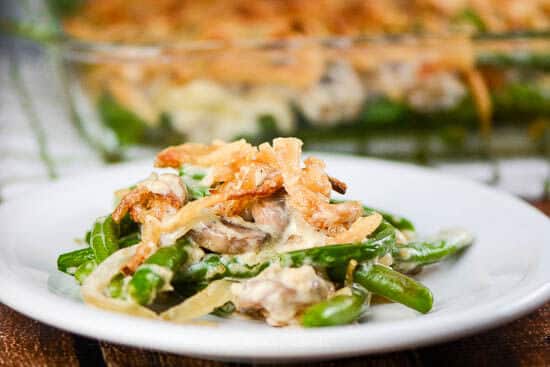 How about this Pumpkin Praline Bread Pudding for dessert! 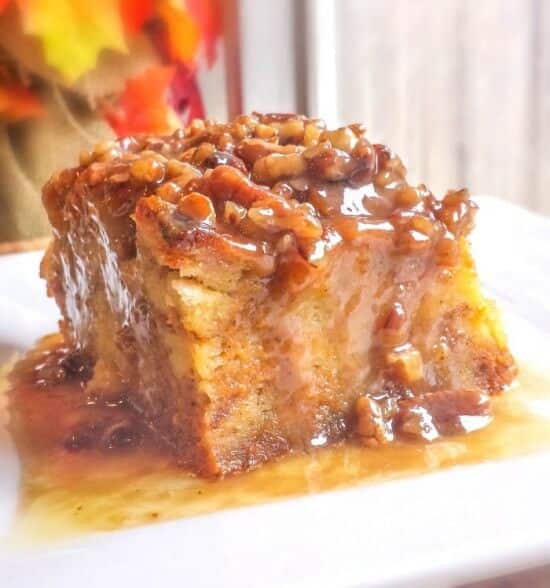