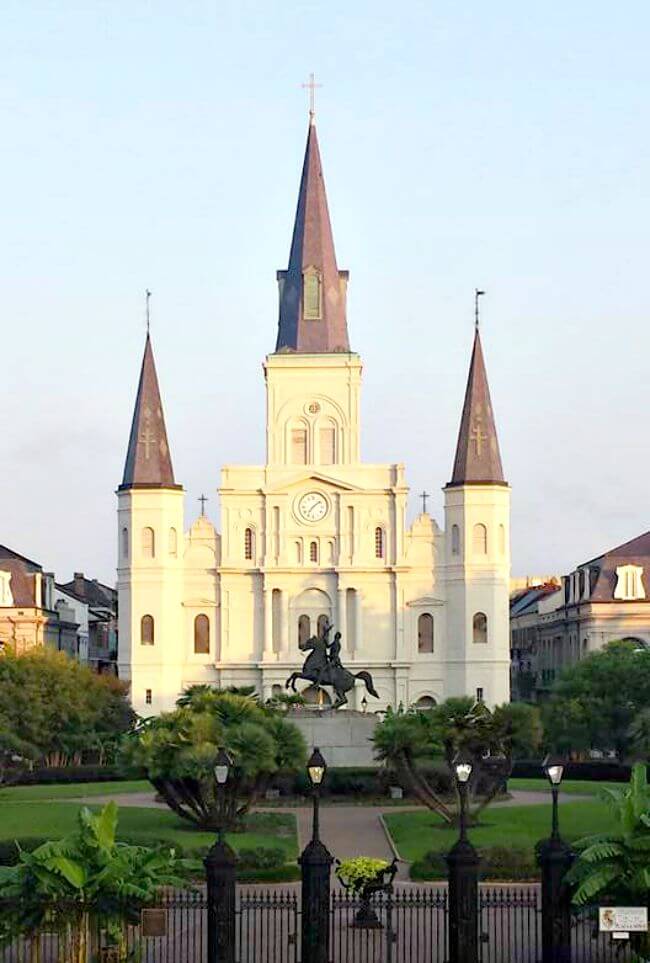 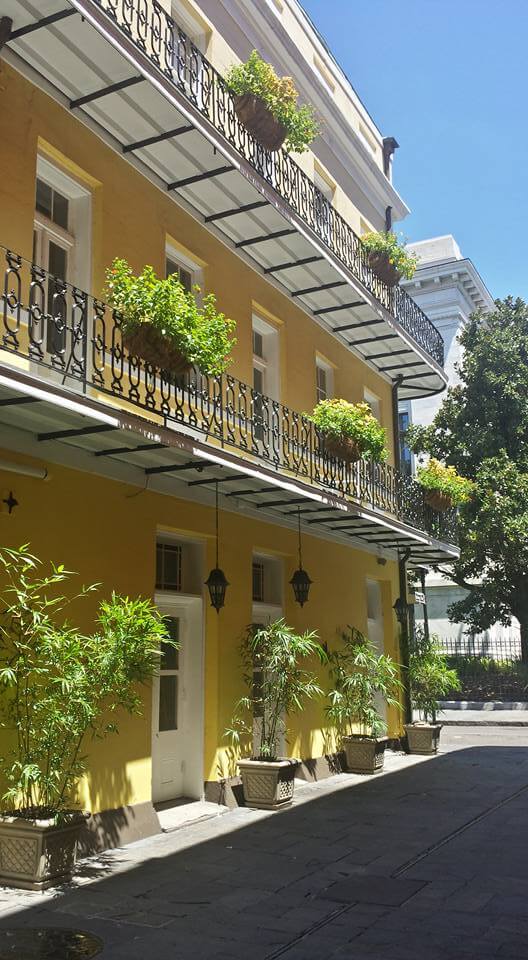 The Canal Street trolley made it easy and economical for us to get up and down Canal Street and around the French Quarter and Central Business District. It was great since it was air conditioned. 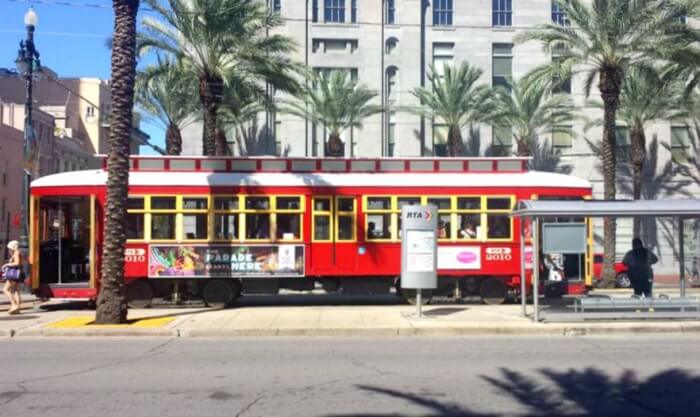 In this post, I’m sharing three dinners we had this weekend, two of which feature the Coolinary New Orleans menu.

When we arrived Friday, we headed around the corner for dinner at The Original Pierre Maspero’s. 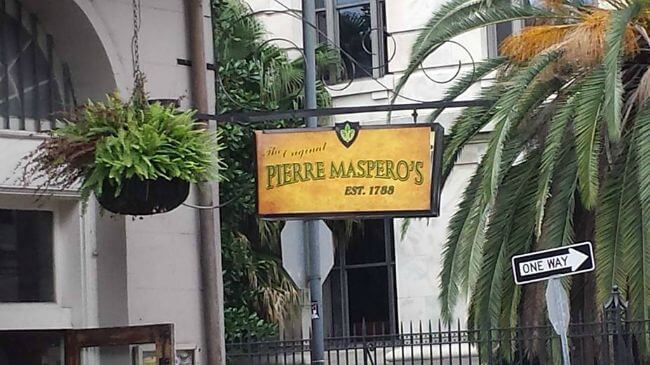 I saw that it had excellent reviews for breakfast, lunch, and dinner and quite a few people mentioned that they loved the atmosphere. 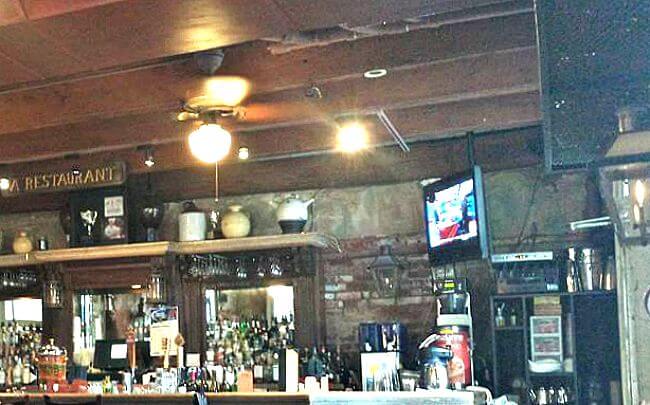 I love good food and excellent service, but prefer a more casual, somewhat rustic, atmosphere with lots of character, such as exposed brick and wood beams. The Original Pierre Maspero’s had the entire package! 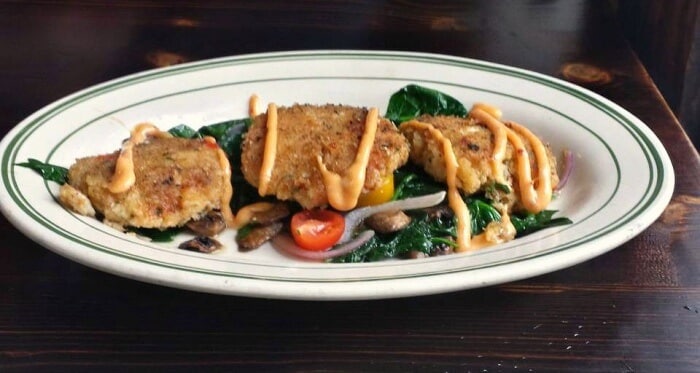 Our server recommended the Crab Cakes Maspero, served over sautéed spinach with heirloom tomatoes, topped with their incredible tangy homemade sauce. I would love the recipe for this sauce! 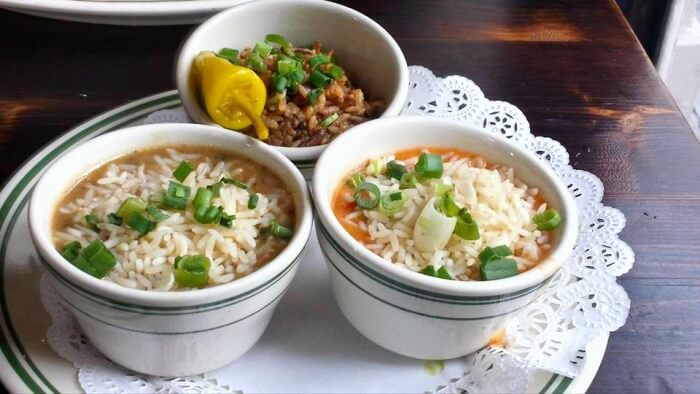 I was having a difficult time deciding what to order from their menu, and our server recommended getting 3 dishes in one by ordering the Crescent City Sampler, which includes Cajun Jambalaya, Crawfish Etouffée and Chicken & Andouille Gumbo.  All were excellent, although my favorite was the Crawfish Étouffée, which is a slow-simmered stew with Creole spices, onions, peppers, celery and crawfish. 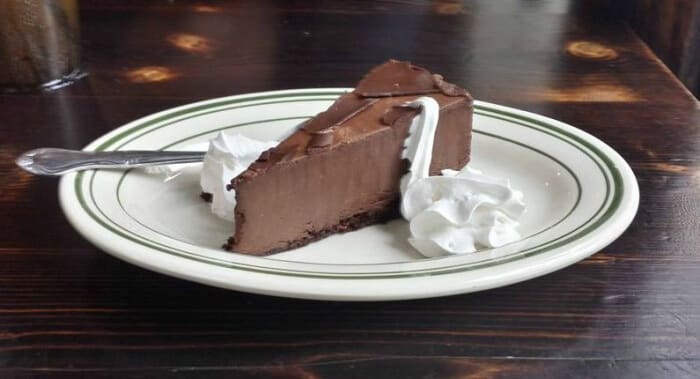 We finished dinner with a rich, velvety chocolate mousse cake that was to die for! 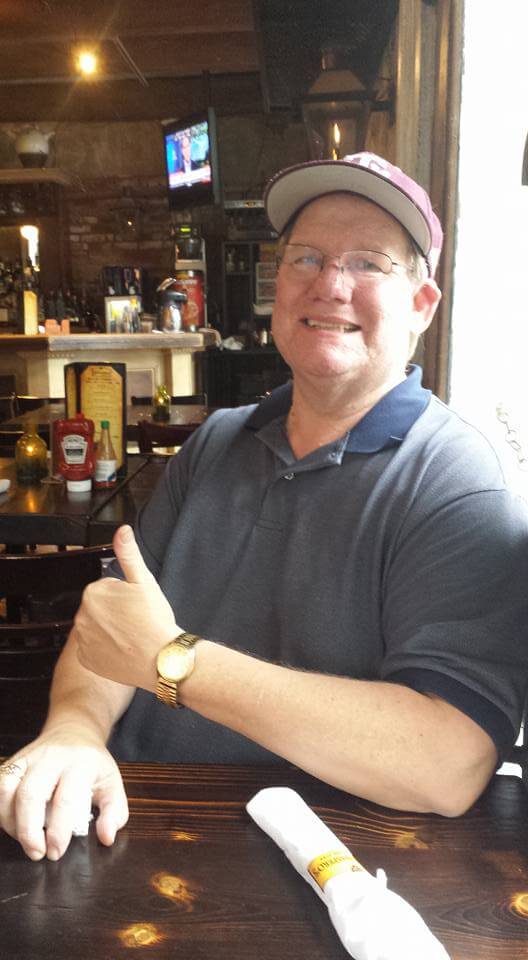 All in all, the Hubs gave The Original Pierre Maspero’s a big thumbs-up! 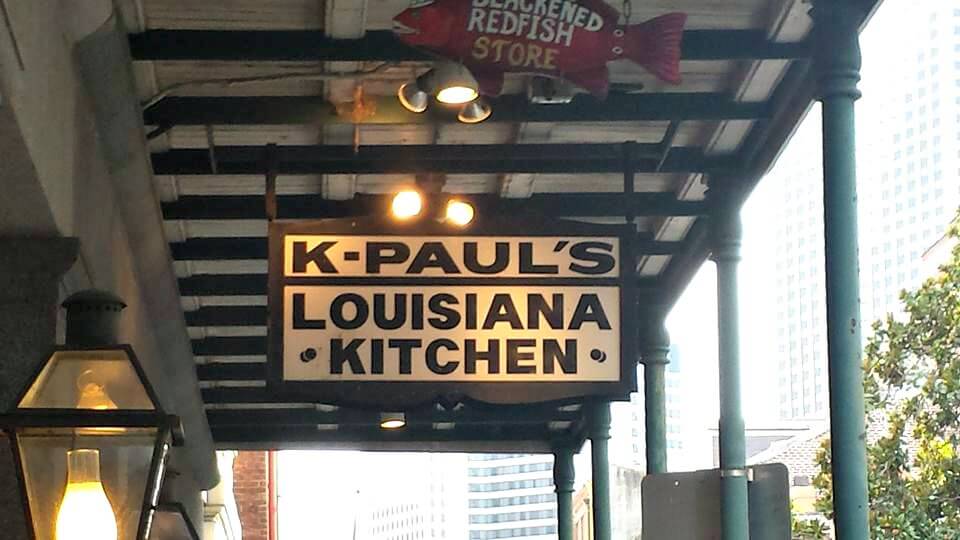 The next night we had dinner at the famous K-Paul’s Louisiana Kitchen, which is just a few doors down from Pierre Maspero’s. They are participating in the Coolinary New Orleans for the dinner menu, but we had to specifically ask to see their Coolinary menu. 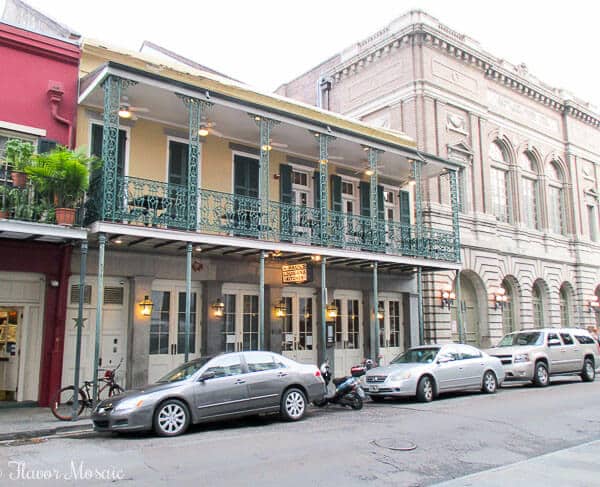 K-Paul’s has a Southern charm and somewhat rustic elegance to it. I loved the atmosphere. 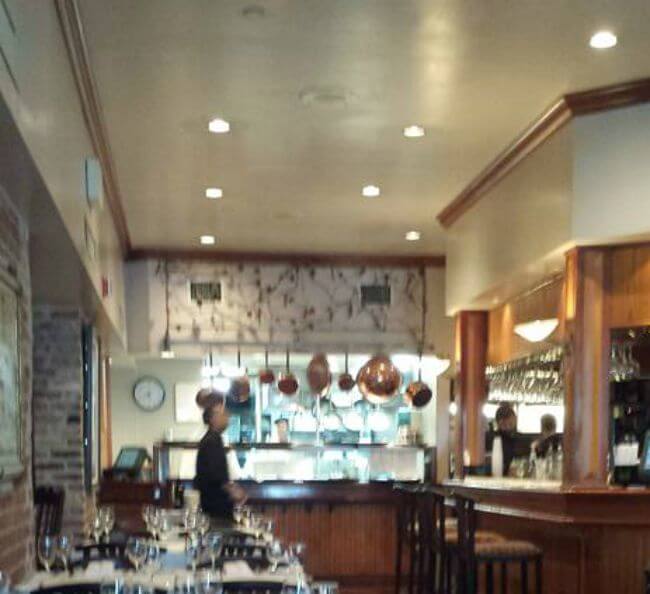 As much as I loved the atmosphere, the food was even better! I ordered off the Coolinary Menu and Hubs ordered off the regular menu. I had a 3-course meal consisting of a cup of gumbo, the Pan-Fried Flounder with Herbal Brie Cream, and the Sweet Potato Pecan Pie. 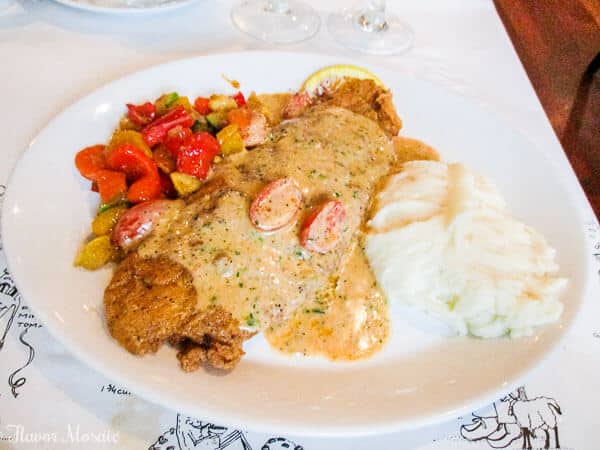 The Flounder was absolutely out of this world! You must try this amazing dish. The Herbal Brie Cream Sauce was spectacular. 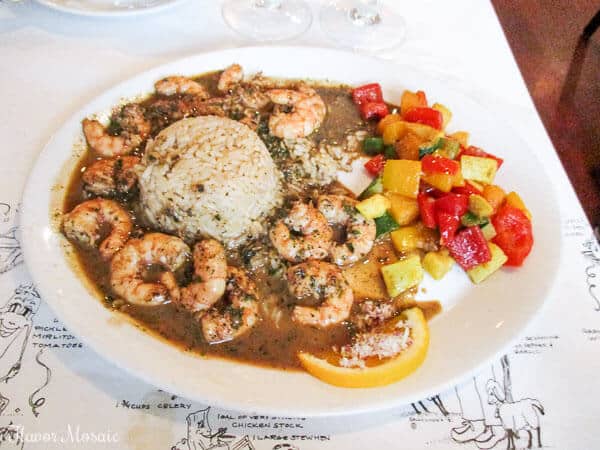 My husband had the Barbecued Shrimp, which isn’t grilled or barbecued, but is prepared the New Orleans way with butter, garlic, worcestershire, and Chef Paul’s Magic seasoning, which does create magic with this dish. 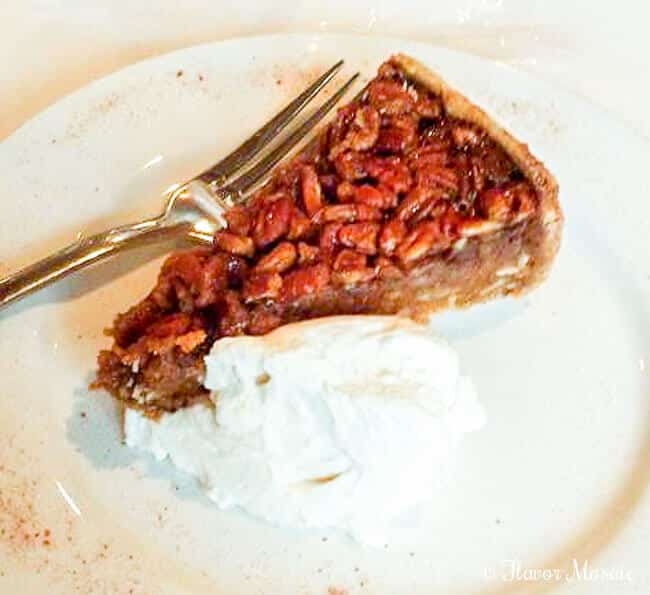 With the Culinary menu, I had a choice of Bread Pudding or Sweet Potato Pecan Pie, and I chose the latter. Basically it is a mash-up of pecan pie and sweet potato pie, and was sweet and creamy with sweet crunchy pecans on top. Yum!!! 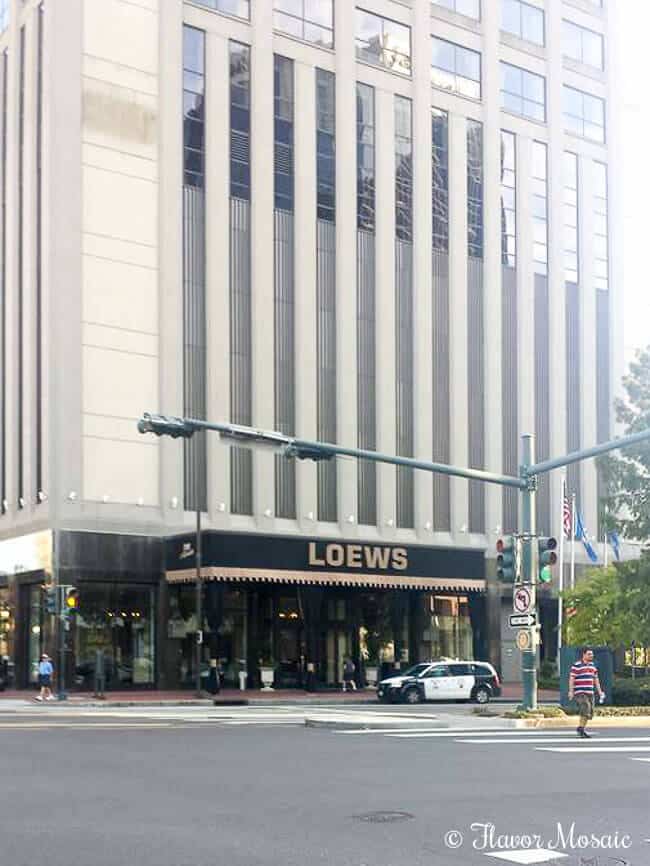 For our last dinner in New Orleans, we headed over to Cafe Adelaide in the Loews Hotel. It is owned by the same group that owns Commander’s Palace, but is a little more casual. It’s dining room is chic yet comfortable with an art deco feel. 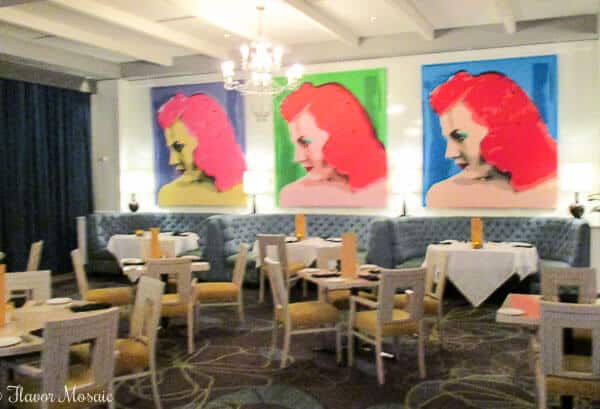 We arrived a little before the dining room opened, so we headed to the recently remodeled lobby and Swizzle Stick Bar for a drink. They really had their customers in mind when they remodeled this because the seats include built-in electrical outlets so you can plug in your cell phones, iPads, or laptops while you enjoy drinks and dinner. 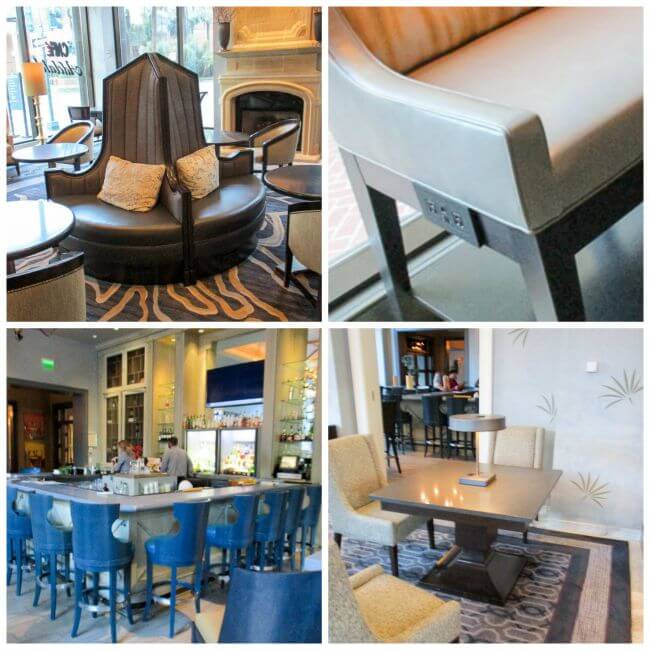 We enjoyed the Swizzle Stick Bar so much that we decided to have dinner in the bar area. We both ordered off their culinary menu. Mr. Flavor Mosaic had a garden salad, and I ordered the amazing Peaches and Cream Salad, with pickled peaches, greens, cucumber, mirliton, bacon granola, with a charred onion vinaigrette, and smoked goat cream cheese. 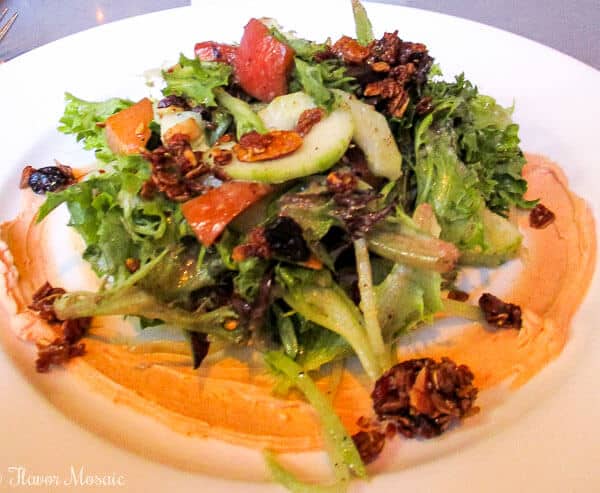 For the entree, I had the New Orleans East Style BBQ Shrimp. While we enjoyed incredible food during this weekend, I think this was my favorite dish. 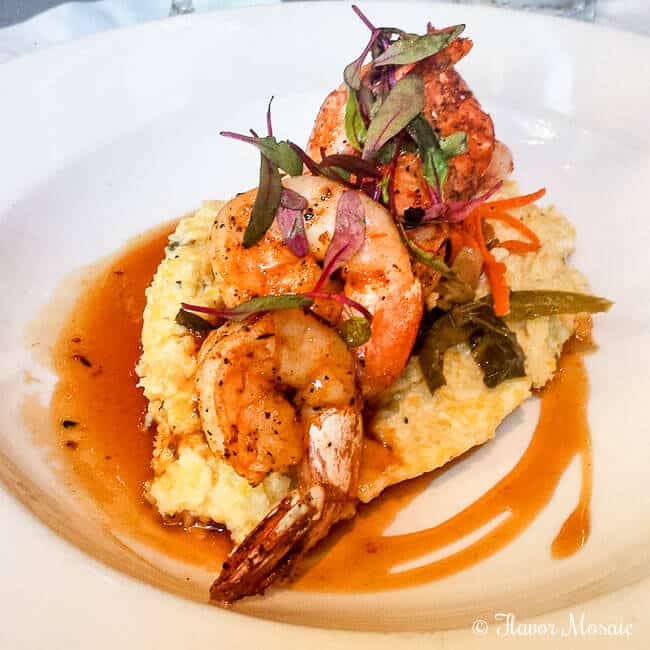 It is not your typical New Orleans BBQ shrimp because it has a spicy Asian style barbecue glaze, served over crab boil kimchi, charred chilis, pork belly, and creamy stone ground grits. 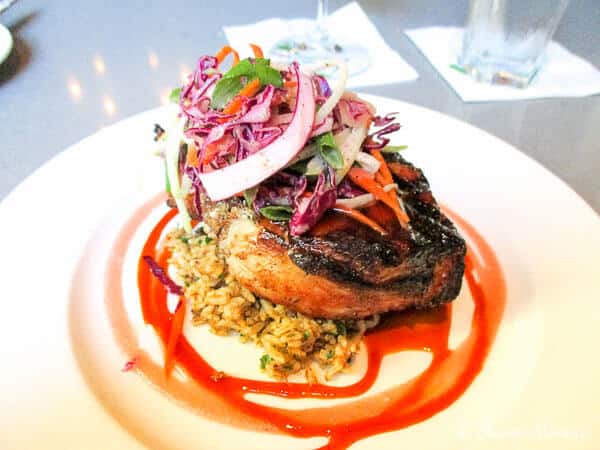 Mr. Flavor Mosaic had the Absinthe Barbecued Double Cut Pork Chop, which was served with pickled fennel, shaved mirliton, grilled baby bok choy & Absinthe BBQ sauce. I knew he liked it because he was not talking (which is unusual) because he was busy chowing down on this pork chop. 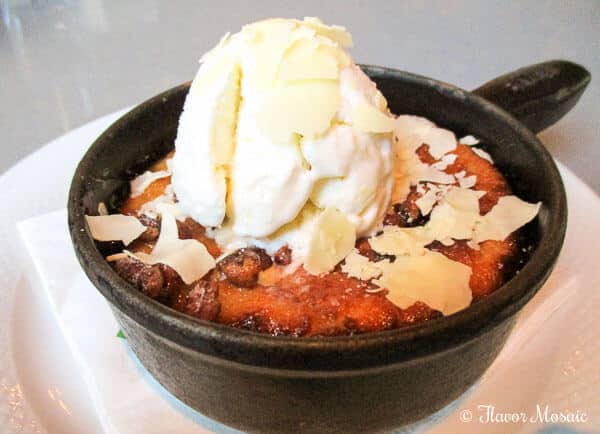 For dessert, I had the White Chocolate Biscuit Pudding with root beer syrup and toasted pecans, which was fantastic. Delicious!! 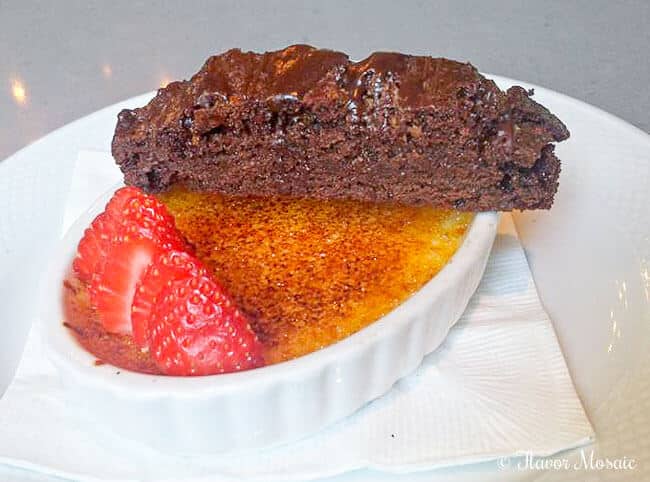 Mr. Flavor Mosaic had the Madagascar Vanilla Bean Crème Brûlée with chocolate biscotti. I know he liked it because I almost did not get this photo. We planned on sharing the desserts but I only managed to get one bite of this because he downed this dessert in no time flat! So Yes. He loved it.

We had a blast during our foodie New Orleans Weekend Getaway. These were only three meals that we enjoyed over the weekend. We certainly had some fantastic breakfasts and lunches as well, which I will discuss in a future post.

There is only one weekend left for Coolinary New Orleans. So head to New Orleans and to your favorite restaurants. It is also the anniversary of Hurricane Katrina with many events going on. Support New Orleans by helping the economy by visiting, eating out, and visiting the tourist attractions.

Disclaimer: I was not compensated for this post; and we paid for all of our meals and travel expenses.