Mexican Cabbage Slaw, also called Fish Taco Slaw, is a cool, tangy cabbage slaw with a Mexican-spiced apple cider vinaigrette that can be served as a side dish or on top of fish tacos, pulled pork sandwiches, or salads.

How Is Mexican Cabbage Slaw Different Than Cole Slaw?

This is definitely not your ordinary KFC coleslaw. There is no mayonnaise, but there is cabbage, carrots, red cabbage, cilantro, and broccoli slaw. The dressing, which is a Mexican vinaigrette has garlic, cumin, oregano, cilantro and lime.

How To Make Mexican Cabbage Slaw From Scratch

This method uses prepackaged slaw mixes to save time.

How Do I Make Apple Cider Vinaigrette?

Mix together the following ingredients into a large bowl.

Can I Make Mexican Cabbage Slaw Ahead of Time?

Can I Use Broccoli Slaw Instead of Cabbage Slaw?

Can I Freeze Mexican Cabbage Slaw?

What Can I Serve With Mexican Cabbage Slaw?

Other Mexican Side Dishes 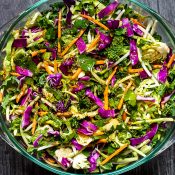 From Scratch Method For Slaw

To Make The Slaw (Shortcut Method)

To Make The Slaw (From Scratch Method)

To Make The Apple Cider Vinaigrette

NOTE 1: The shortcut method saves time on prepping the slaw. It saves time, slicing and chopping. NOTE 2: Optional ingredients are not required for this recipe.  NOTE 3: The longer the prepared Mexican Cabbage Slaw sits in the refrigerator, the more the flavors fully develop. It is a great dish to prepare the night before.