Lucio Matricardi, a winemaker from Stemmari wines in Sicily, recently hosted a Sicilian dinner for local writers and bloggers at Coppa Osteria restaurant in Houston, Texas to introduce us to Stemmari Wines.

As a blogger, sometimes I receive an invitation to a nice dinner at a local restaurant. Last month I had one of those dinners. 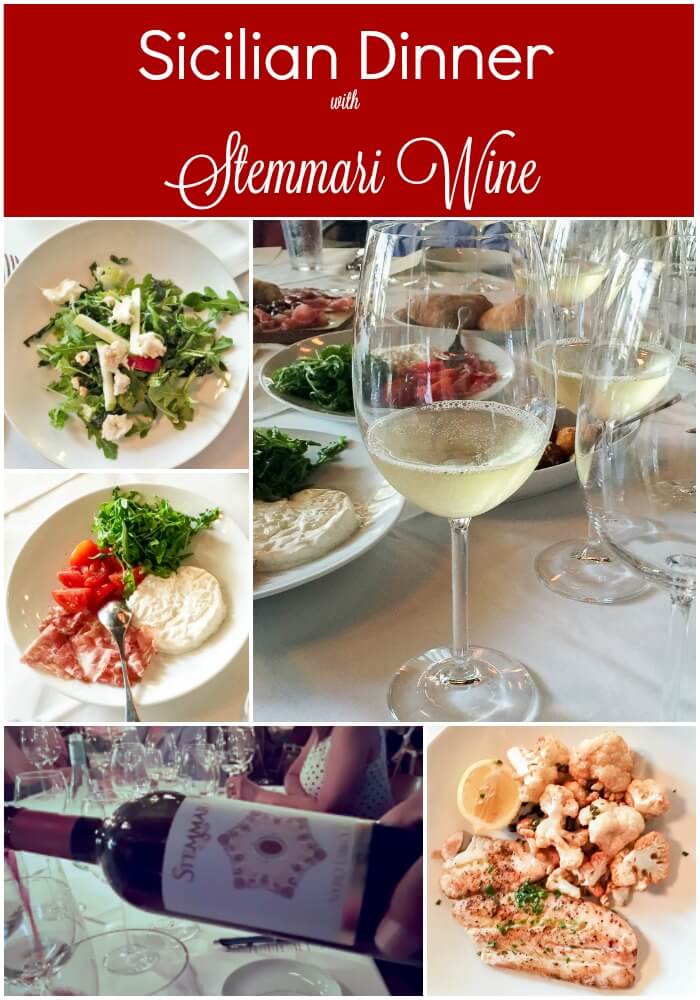 Sicily, the largest Mediterranean island located below the boot of Italy, is known for its diverse architecture, cuisine, and the Byzantine Mosaic art.

However, this night and this dinner were not about the mosaic art of Sicily but the mosaic of flavors in their food, especially in the Sicilian wines, specifically Stemmari Wine.

Lucio Matricardi, the winemaker for Stemmari, told us about growing up in Sicily, a little about Sicilian life, and how the different climates affect wine making. He was lively and energetic and obviously very passionate about winemaking. He told us about how his ancestors focused on marsala wine, but today, using advanced, sustainable winemaking techniques, Sicily produces many types of wine, including white wine, rose, and red wines in addition to Marsala wine. 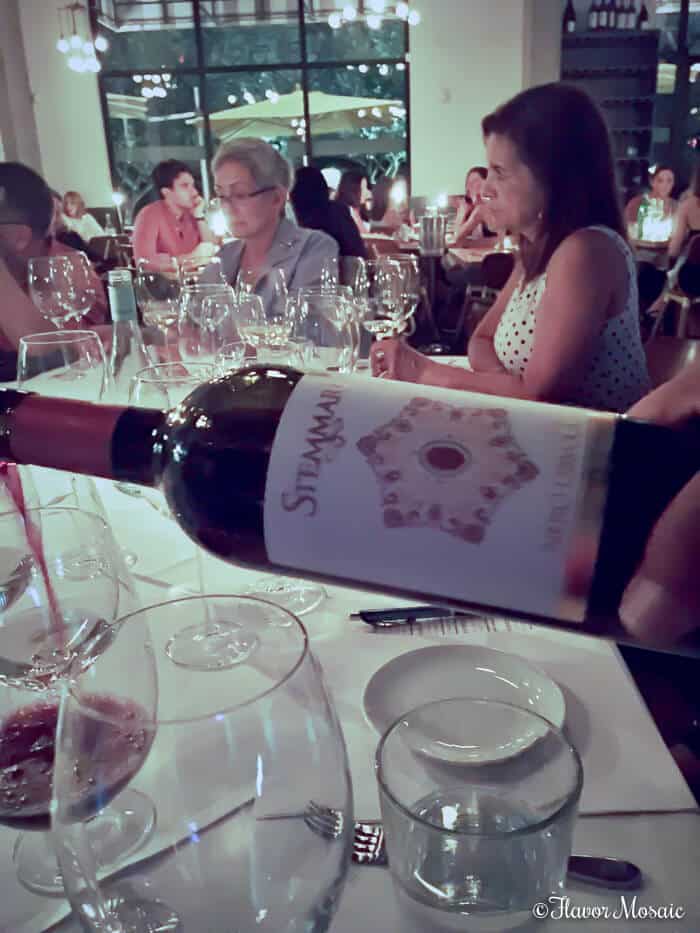 Listening to him I could imagine myself sitting down to dinner with a big Sicilian family with everyone talking at once and talking with their hands, and enjoying delicious Sicilian food and wine. I imagine it might be like if you combined a scene out of the movie, My Big Fat Greek Wedding, with a dinner scene from the Sopranos.

Coppa Osteria provided a delicious menu of foods for pairing with the wine. Lucio changed up the order of the wines, and all were delicious. 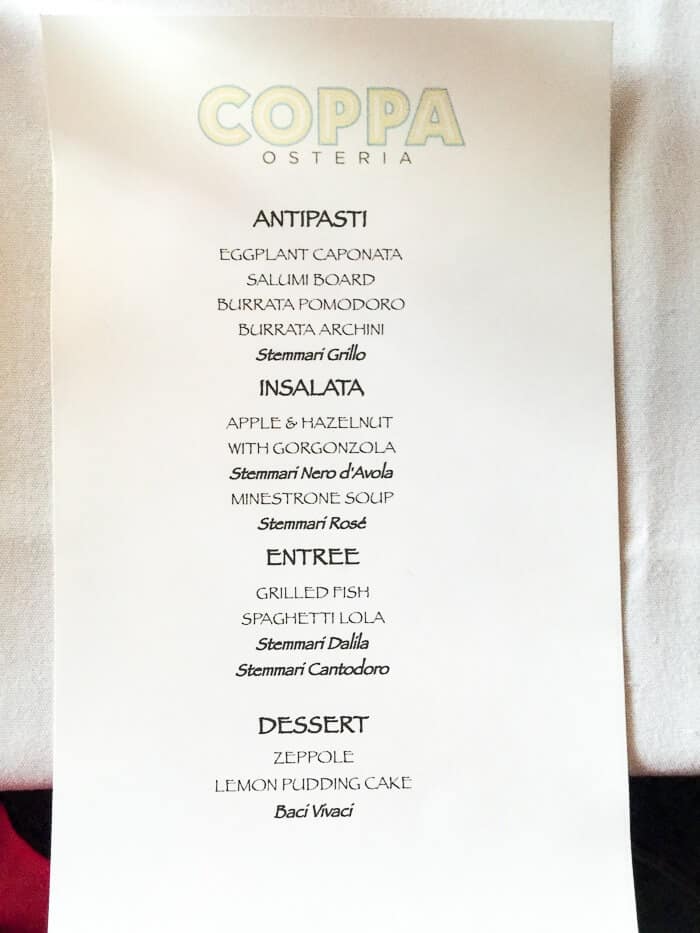 We enjoyed the antipasti with Stemmari Baci Vivaci, which means “lively kisses.” Doesn’t that description alone make you want to try it? It has refreshing natural bubbles, and a fruity flavor and floral aroma. It paired very nicely with our meat and cheese appetizers. It is available at area HEBs.

To enjoy Baci Vivaci like a Sicilian, pair it with the traditional Sicilian panellas, or chickpea fritters, which are a popular street food in Sicily’s capital, Palermo. Fried foods, such as the panellas, balance out the wine’s minerality and acidity. 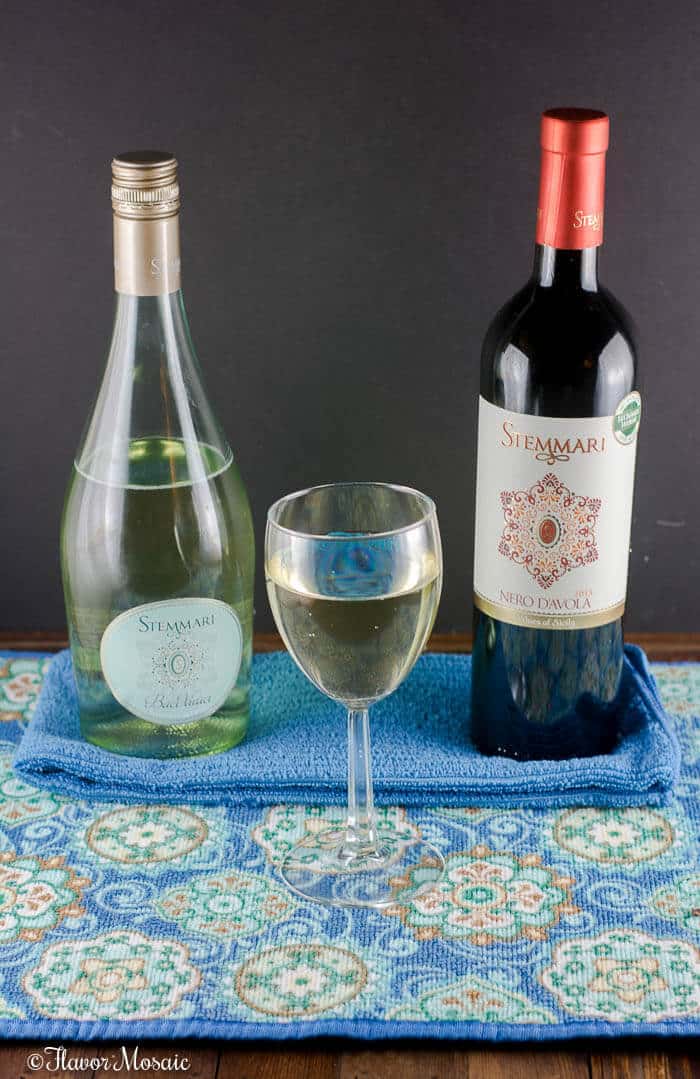 Of all the wines Baci Vivaci was my personal favorite. 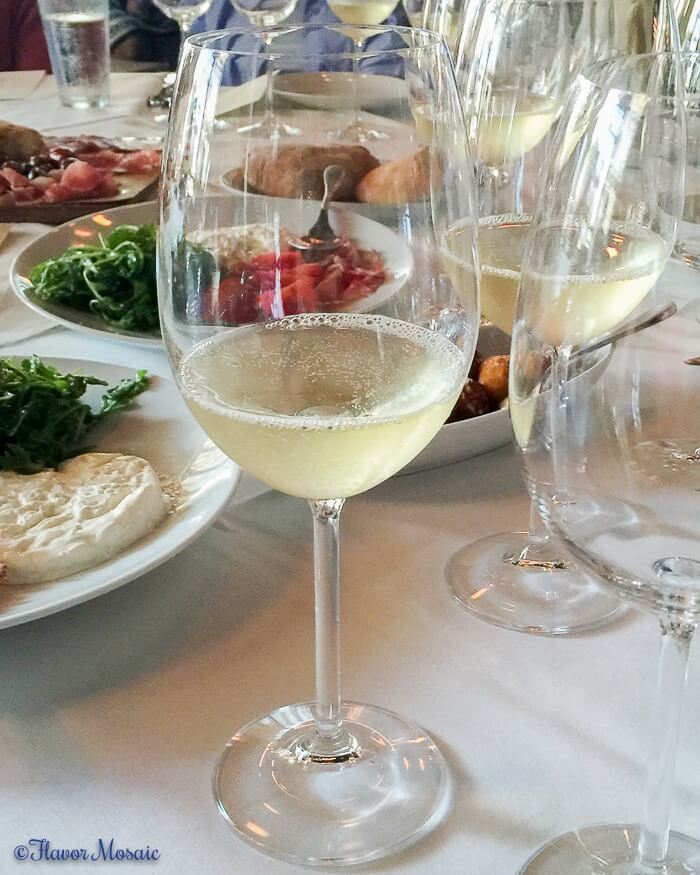 We enjoyed the Baci Vivaci with several of Coppa Osteria’s antipasti dishes, such as Burrata Pomodoro, Burrata Arancini, and the salumi board. 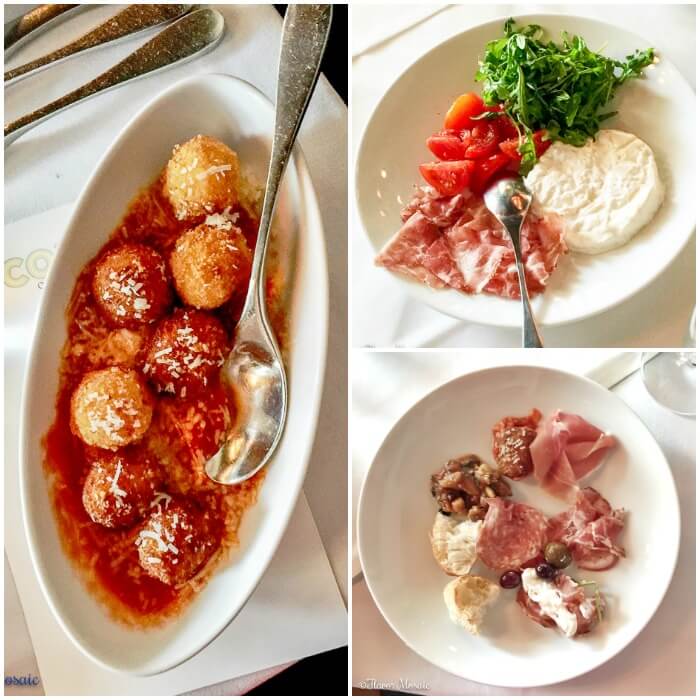 2014 Stemmari Rose is fruity with strong aromas and flavor of strawberries. It is made from Nero D’Avalo grapes from the Ragusa region with its sandy soils and sunshine. This pairs well with light appetizers, vegetables, and white meat dishes. 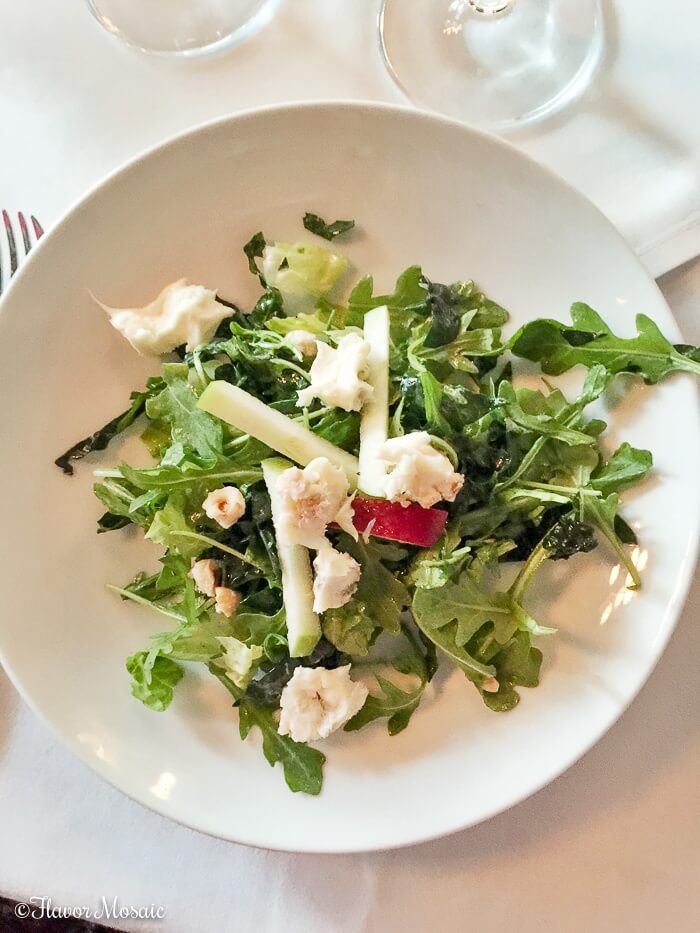 2014 Stemmari Grillo has a tropical aroma with hints of mango and papaya. It is also from the Ragusa region with its sandy soil and lots of sunshine. It paired very well with my fish. 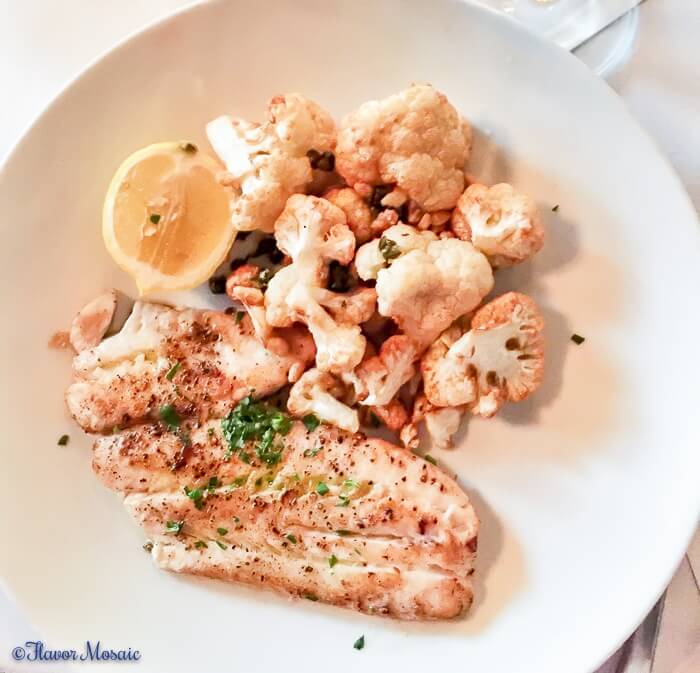 2014 Stemmari Nero D’Avalo is a red wine with aromas of strawberries, currants, and pomegranate with a velvety fruity flavor. This grape originally was found in Saracusa but is now found in all winemaking areas of Sicily. This wine pairs with red meats, baked pasta like lasagna, and with Risotto.

The Song of Sicily

We were introduced to two wine blends that are tied together with a musical love story that is intertwined with Sicily’s culture and history. Since I am a classical music lover and a romantic at heart, this story really appealed to me.

Lucio explained that in World War II field workers would sing while they worked. The enemy did not realize that they were using the songs to communicate with workers in other fields to let them know where enemy troops were located and that was passed along to their army. Music is a part of the Sicilian culture.

You will see musical notes on the labels of bottles of Stemmari Dalila and Stemmari Cantadoro wine blends. The musical notes are from a song about a vineyard owner’s daughter (Dalila) and a worker (Cantadoro). The bottles are beautiful with a romantic story.  I think this pair of wine blends would make a lovely gift, especially for Valentine’s Day or for an anniversary. 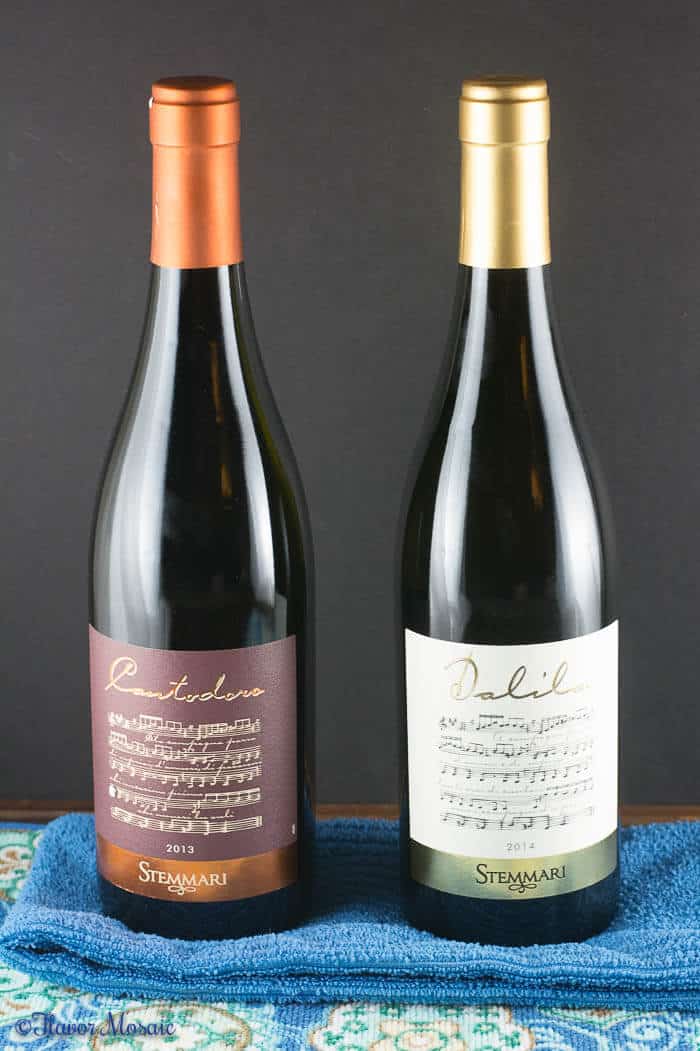 Now that you know the story behind the label, below is information about the wine blends.

2014 Stemmari Dalila is a blend of 80% Grillo and 20% Viognier for a rich white with vanilla undertones and an intense bouquet of tropical fruit and jasmine with peach and citrus. It pairs well with seafood, pasta, and white meat dishes.

2013 Stemmari Cantodoro is a blend of 80% Nero d’Avola and 20% Cabernet Sauvignon. This has great depth of flavor with aromas of blackberry, raspberry, and cranberry. This pairs with pasta with meat sauce, grilled meats, and aged cheeses.

By the end of the dinner, we learned about Sicily, Stemmari Wine, and even a musical love story. Be sure to stop by HEB or Spec’s to pick up a bottle of your favorite Stemmari Wine.