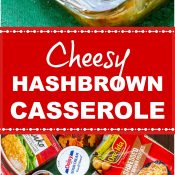 Nothing is more comforting or crowd-pleasing than the good old creamy, cheesy hash brown potato casserole that has been served at family gatherings, potlucks, funerals, and church suppers for generations.

My sister serves her version every Thanksgiving. People threaten not to show up if the hash brown casserole is not served.  It is tradition, and you don’t mess with tradition……until now.

What Is A Cheesy Hashbrown Casserole?

Cheesy Hashbrown Casserole, also known as a Cracker Barrel Hashbrown Casserole, is a Thanksgiving side dish casserole made with shredded hashbrown potatoes, sour cream, cream of chicken soup, and shredded cheese that is a favorite Southern casserole and is popular for holidays, Thanksgiving, and potlucks because it can feed a crowd, is easy to make and is budget-friendly.

How To Make a Cheesy Hashbrown Casserole?

It is extremely easy to make a Cheesy Hashbrown Casserole, and I’ll show you how to make a variation on the basic recipe to include bacon and ranch flavors.

What Ingredients Are In For Cheesy Hashbrown Casserole?

You will need the following ingredients to make this casserole.

Ingredients For Base Hashbrown Casserole Recipe

What Can I Substitute For Cream of Chicken Soup?

How To Make This Cheesy Hashbrown Casserole

To make it, start with the chicken soup base, which consists of butter, flour, onions, chicken broth, and milk.  Then add the seasonings: salt, pepper, ranch seasoning mix, Worcestershire, hot sauce, and bacon.  Stir in all the traditional ingredients, sour cream, cheese, and shredded potatoes.  And for the finale, top with the crunchy panko breadcrumbs drizzled with melted butter.

How Long To Bake a Cheesy Hashbrown Casserole?

Cook for approximately 45 minutes to an hour and then you have the most amazing potato casserole you have ever tasted in your life!

My version of this rich cheesy potato casserole includes chopped bacon, ranch seasoning mix, Worcestershire and hot sauce.  What it doesn’t have is canned soup.  No cream of chicken or cream of mushroom or cream of anything soup.  This version is so easy to make, and it saves money too.

And I must say that these potatoes are frickin’ AWESOME!  As far as I’m concerned I don’t need to make any more recipes.  I could just live on this Hashbrown casserole alone.  It tastes that good. I heard someone call them “crack” potatoes and that would be accurate because they are addictive. Make sure you have a crowd to feed because, otherwise, you can’t stop eating this stuff.

How To Freeze A Hashbrown Casserole

This casserole freezes very well. As a matter of fact, many people make 2 casseroles at once so they can serve one and freeze the second one to serve at a later date.

Wrap the unbaked casserole with freezer wrap or aluminum foil. Write the name of the dish and write the date. You can freeze the hashbrown casserole for up to 3 months.

When you remove from the freezer, let the casserole thaw completely before baking. Bake the casserole according to the recipe directions.

It’s your turn.  Are you a traditionalist?  Do you dare to tempt fate and tweak tradition? Go ahead I dare you.  I double dare you!  Go ahead.  Make this Cheesy Bacon Ranch Hashbrown Casserole. You will thank me later.

What To Serve With Cheesy Bacon Ranch Hash Brown Casserole? 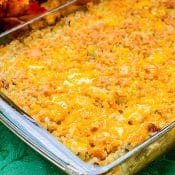 US Customary – Metric
Prevent your screen from going dark

This post may be included in one of these fantastic link parties and the Weekend Potluck #111.

This recipe was originally published on October 26, 2013, and republished with new photos and additional information on November 12, 2018. 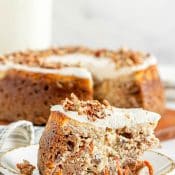 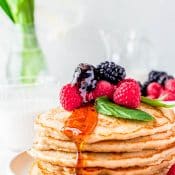 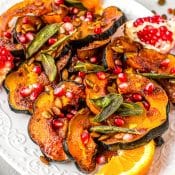